The next installment of the Power BI Configuration Manager Dashboard is here!

We’ve been busy making some changes to the successful 1.4 version which we brought out back in July. We’re now over 4000 downloads on the technet gallery and can’t believe the positive response from the community.

With the ever progressing Power BI (BI) and Configuration Manager (ConfigMgr) updates, we had to address a few problems with query and website changes. I took the decision to wait for this version rather than release a quick fix as we were so far into this one and wanted to get this version out asap.

With this version, we’ve taken the approach to change naming convention in line with ConfigMgr, moving to a Year/Month format. This should make it easier when BI and ConfigMgr receive updates, as we can release a tested version based on a ConfigMgr or BI release.

This view contains a basic overview of client information such as, EndPoint Compliance, Client Activity and Health.

This contains a breakdown of your site workstations/Servers including manufacturer, operating systems, architecture and even chassis type info! The Chassis Type information now built into the report and workstation admin page consolidated into main page. 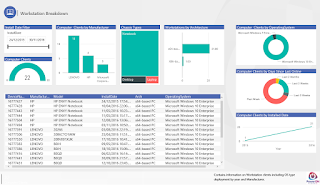 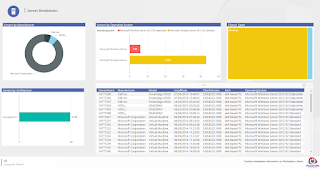 This contains a breakdown of your Windows 10 workstations including things like branch and OS version. 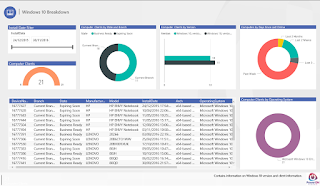 Contains summary information on your clients health and activity status. 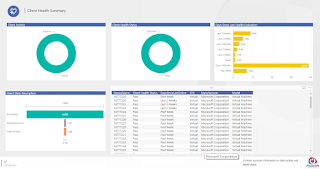 This view contains a breakdown for update compliance, showing you missing updates by bulletin ID. 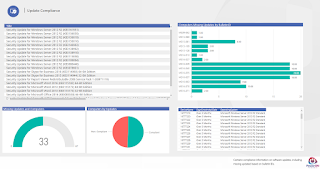 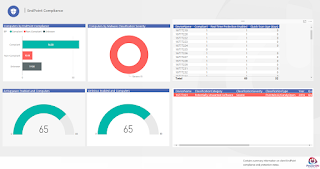 The site admin view has been completely revamped. With changes to the support lifecycle page, it stopped the query from pulling back information. We’ve updated this to now include a drill down for Mainstream, Extended and Service Pack end dates. We’ve also included the technet blog feed and site information to really made this page usefl for keeping on top of updates.

This view contains summary information on Managed Mobile Devices in ConfigMgr. It allows you to view things like Make and OS version of devices connected. We’ve updated the visuals and included a table view for additional information. 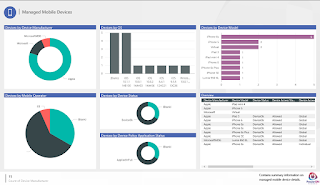 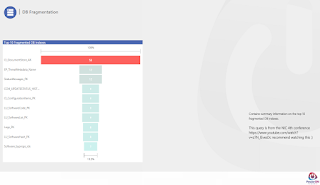 You can download the dashboard from the Technet Gallery
Ensure you have at least read access to the SCCM SQL Database and you can access the Internet from the machine running Power BI.
Download the lastest Power BI desktop.
Once installed Open Power BI.
1. Go to File > Options and Settings > Options.
2. Under Privacy enable Fast Combine to file privacy. 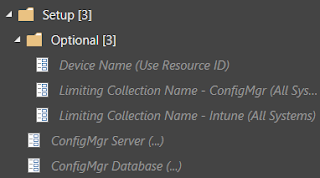 6. Select the “_Client Information” query under the ConfigMgr and supply any credentials required to access the database.

7. If prompted, Click OK on the encryption support message.

8. Close the Query Editor and load the data

Publishing to the Web

The desktop version of Power BI is free to use and I used this without publishing the report up to the web just to produce a quick report. The data is on this report is not live as its only from the last time you load the data but you can easily reload the information on startup.
For an even better experience, you can publish the file up to the web and create a dashboard.  though there can be cost implications but there is a free version.  Check on Power BI’s website for further information on what best suits you. 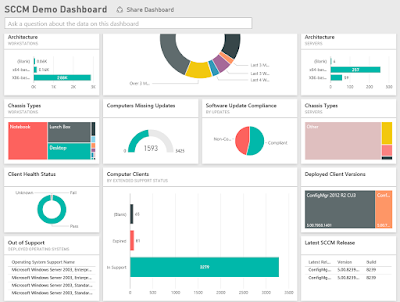 The great thing about publishing is you can utilise the ask a question feature which is awesome!

Power Bi also comes with a mobile app which allows you to access the report from your mobile device anywhere too. 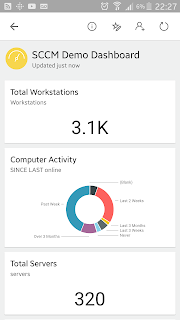 For advanced support, customisations or consultancy contact the PowerON team

If you are looking for managed IT support and think you could benefit from PowerON’s consultancy services and solutions, please get in touch on +44800 302 9280.

The team are here to help

If there are any questions and want to learn more about PowerON’s services or Solutions, please get in touch and a member of the team will be in touch shortly.

Design by PowerON
Scroll to top